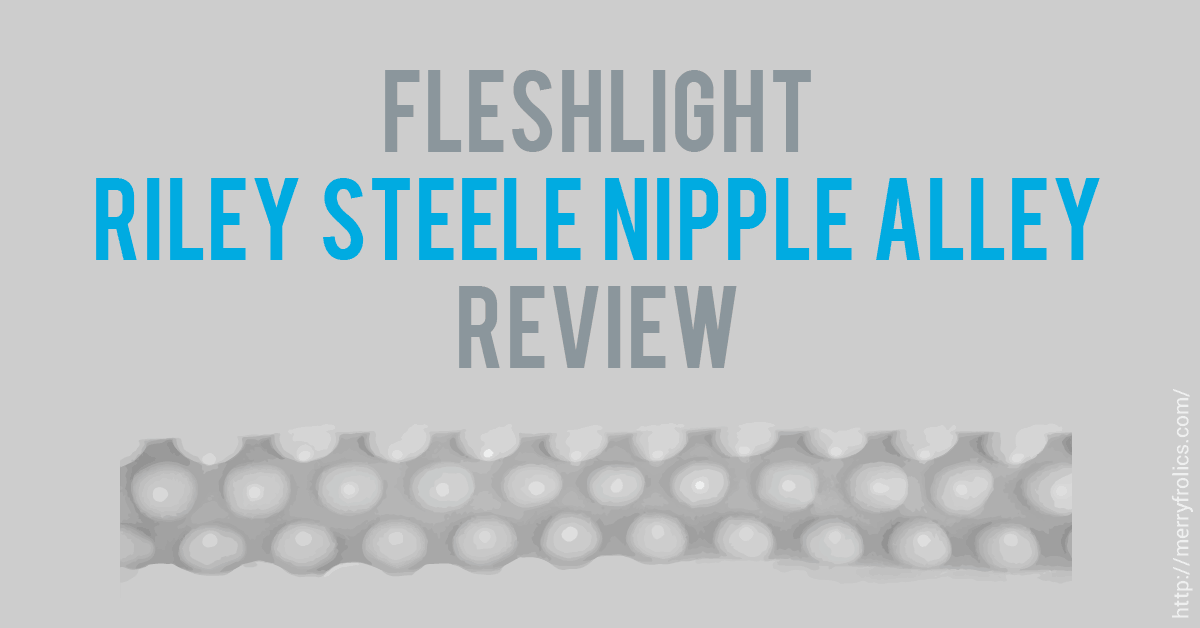 Riley Steele has collected 25 awards for her adult performances and continues to perform in both pornographic and mainstream movies today. She has worked with Fleshlight to produce two exclusive sleeves: the vaginal Nipple Alley and the Lit butt sleeve.

GET YOUR OWN RILEY STEELE NIPPLE ALLEY FLESHLIGHT Nipple Alley is entered through a perfect replica of Riley Steele’s inviting pussy lips, with her signature displayed alongside them. Inside, the canal is quite wide compared to many sleeves, at 0.7” (18mm).

The texture is quite a simple one: the whole sleeve is lined with medium sized bumps which surround the penis on all sides. These bumps are not quite smooth - each one is tipped with another tiny bump (or ‘nipple’) to add extra stimulation.

How the Nipple Alley Feels

Simple textures are often the best, and Nipple Alley is no exception. The stimulation begins as soon as you enter the sleeve and the repeated bumps means that it surrounds your penis completely and doesn’t let up at all.

The tiny ‘nipples’ on the end of the bumps can be felt as tiny points of stimulation. The sheer number of them means that the stimulation can be felt all around your shaft: it is a constant and incredibly intense feeling.

Despite the intensity, I found the sleeve comfortable to use during and after orgasm; the width means that the pressure does not become too much for an over sensitive penis.

If you have shopped for Fleshlights before then you might have noticed the resemblance between Nipple Alley and two other popular sleeves: the STU (Stamina Training﻿﻿ U﻿nit﻿) and Speed Bump. While the extra nipples make the stimulation slightly different, it is definitely worth comparing the three.

Personally, I found the STU a lot more obviously intense than Nipple Alley. The former almost over-stimulates, especially when the penis becomes sensitive. Speed Bump is closer in feeling to Nipple Alley but less intense. Both are narrower than Nipple Alley so might suit thinner guys better. Of the three, I enjoyed Nipple Alley most.

The wide canal means that cleaning the Nipple Alley sleeve is not too difficult, though it does need some attention to make sure that any lube trapped between the bumps is removed. I recommend ‘sealing’ one end of the sleeve with a finger before filling it with water and swishing it around. It can be dried as usual in a warm dry spot (avoid putting it directly on top of a radiator or heater).

If you liked the STU but felt it’s too tight, then the Riley Steele Nipple Alley might be right up your alley. I enjoyed it more than the Stamina Training Unit. The Nipple Alley is fairly intense but using it is more relaxing than tighter, intense sleeves.

GET YOUR OWN RILEY STEELE NIPPLE ALLEY FLESHLIGHT

If you liked Nipple Alley, why not try one of the following?

Stamina Training Unit (STU): The STU is made to over-stimulate the penis so will suit guys who like a very, very intense sleeve. If you liked Nipple Alley but would prefer something tighter and more stimulating then STU might be the answer.

Riley ﻿﻿﻿﻿﻿Steele Li﻿﻿t﻿: Fans of Riley Steele will be happy to know that she is one of the Fleshlight Girls who has given her name to two exclusive textures. Lit is modelled on her butt and features a complex set of textures in three very distinct chambers.

Bought a new Fleshlight? See the How to Use and How to Take Care guides to get most out of your new sex toy.