GET YOUR OWN  RILEY REID EUPHORIA FLESHLIGHT Former stripper Riley Reid has been filming adult movies since 2011. The 19 year old brunette worked for a while under the name Paige Riley. Since her debut as an extra she has taken part in over 250 productions, been nominated for 18 awards, and won 7. 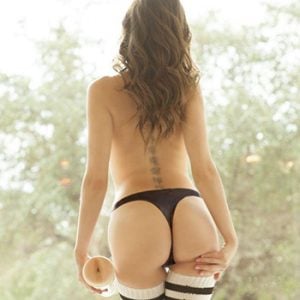 Riley Reid Euphoria
Recommended to anyone who loves the gentle undulations of widening and narrowing walls but prefers to avoid the very tight constrictions .
GET YOUR OWN NOW → The entrance to the sleeve is tight: just 0.4” (1cm) wide. It quickly opens out into the first of three very similar chambers, separated by wide cross ribs which create a tight entry point to each section. The chambers are all 2.7” (6.8cm) long, but each one is slightly tighter than the one before. The third chamber starts 6.5” (16.5cm) into the sleeve so only larger guys will be able to reach the final section.

How the Fleshlight Euphoria Feels

The entrance to the Euphoria sleeve was enjoyably tight; just slipping the head of the penis inside feels great. But the unique texture inside is what I was really interested in checking out.

The first chamber opens out around the penis but constricts nicely as you slide further in, making the surrounding texture more noticeable. The ridges and nubs are just enough to stimulate without being too intense, especially as they graze the sensitive tip of the penis.

The widening and narrowing of the chambers adds a touch of realism as it feels like constricting muscles moving around you. I was quite impressed with the intensity of feeling created by the relatively subtle texture and liked the fact that the textured walls were gentle enough to be tolerable after orgasm, while withdrawing an oversensitive penis.

I did not reach past the entrance of the final chamber but, as the only difference is a slightly narrower fit, I did not feel like I was missing anything.

Heavily textured sleeves are always difficult to clean due to the extra nooks and crannies which trap lube. I recommend running plenty of fresh clean water through both ends of the sleeve and inserting a finger as far as possible to fully clear out the sections between the chambers. You will need to allow several hours to dry the sleeve – leave it out in a warm dry spot for as long as possible and make sure it is fully dry before returning it to storage. Read the guide to Fleshlight cleaning and care for more details.

I really liked the Fleshlight Euphoria masturbator. It was not the most intense, the tightest, or the most stimulating but was just enough to provide a great orgasm without ever becoming uncomfortable. A great sleeve overall.

GET YOUR OWN  RILEY REID EUPHORIA FLESHLIGHT

Riley Reid Utopia: If you are already a fan of Riley Reid then you will want to complete the set with Utopia. It’s lined with tiny bumps and spiraling ridges and entered through a realistic replica of Riley’s own inviting pussy lips.

Mia Malkova Boss Level is a fantastic all-round sleeve, and one of the better ass Fleshlights I have tried. The combination of textures and tightness are just right. Read my Boss Level review.

Not a butt sleeve, but another Fleshlight from a great petite Fleshlight girl is Elsa Jean Tasty.

Once a week I comb through two dozen sex toy companies and sex shops to find the best deals on male sex toys.

SEE ALL THE DEALS